Pillars of the Church 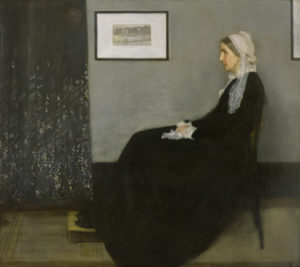 Whistler’s Mother sits with her hands folded on her lap, her gaze level and distant. She sits just as she has for more than one hundred years, the tragedies and joys of her life coalesced in one image, static and without embellishment.

The painting garnered no small amount of controversy at the time of its unveiling for unfeeling manner in which Artist Jack M. Whistler appeared to depict his own mother. But to Whistler, the only thing that mattered in the painting was its aesthetic appeal.  “Art should …appeal to the artistic sense of eye or ear, without confounding this with emotions entirely foreign to it…Take the picture of my mother…as an Arrangement in Grey and Black. Now that is what it is…what can or ought the public care about the identity of the portrait?” (J. M. Whistler, from The Gentle Art of Making Enemies, 1890).

But the public did care about the identity of this elderly woman, about her story, her life. We still do. Juxtaposed with the clean lines and subdued hues that make up the painting, we now know that the life of Whistler’ mother, Anna McNeill Whistler, was anything but serene. She lived in three countries. She witnessed the American Civil War, and then while living in Russia, lost her husband and three of her children to illness. She moved to London with her other children, including artist Jack, and there lived off and on with them until her death. The viewer gets not a hint of this from her son’s depiction of her, which artfully conceals the ocean of experience that rested in that woman at the time of her rendering. That was, in fact, the artist’s intent, as we learn from a letter Whistler’s mother wrote to her sister after sitting for her portrait. She wrote: “I so interested stood as a statue! But realized it to be too great an effort, so my dear patient Artist who is gently patient as he is never wearying in his perseverance concluding to paint me sitting perfectly at my ease.” 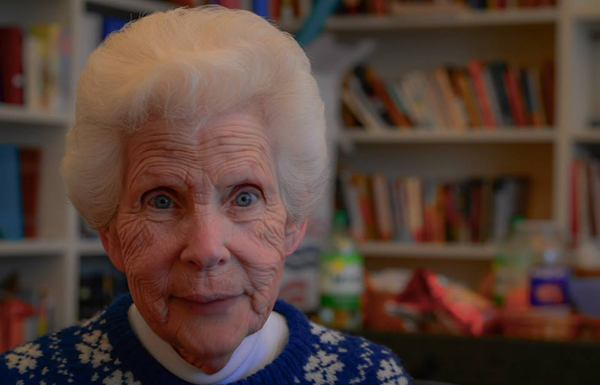 When Brian Russo takes his portraits of the seniors he ministers to, there is a serenity, a joy, an ease in the faces of his subjects that you can’t help but compare to the portrait Whistler painted of his mother more than a century ago. The photographs are part of a series Brian is working on when not preaching, directing the youth group’s activities, or ministering to the seniors in its congregation who may who no longer have the health or energy to attend worship service on Sunday. The series grew out of the awe he experiences when working with people who have been on the Earth almost three times as long as he has.

“We take so many pictures when we’re young….” Brian muses, “but it seems that once you eclipse 80-something, they’re so beautiful, but society makes it out to be that you no longer have beauty…they really have beauty and the beauty is in their personality and the stories they tell…they’ve spent these great lives: spent a year in India…sailed around the world…you hear that, and think about how full life is.”

In one portrait, Harris and Ann Carr, sit next to each other and smile at the camera. Harris used to volunteer in the church office stapling the Sunday bulletin before a fancy new copier machine arrived and put him out of business. They still live in their own house and insist on serving both Brian and Anya, his wife, dinner during their visit.  His visits have transitioned from ministerial to social – Harris and Anne are more like family to him and Anya, now. In another portrait, Jean Elliott, sits off to the left of the frame, donning a blue knit sweater whose hue perfectly matches her eyes as they peer out of the photograph. “Jean Elliott,” Brian explains, “everyone knows. She IS the Church. She is here every Sunday an hour early without fail. She knows everything about the Presbyterian Church.” In another portrait, Jean Hardwick sits back in her chair as a stuffed Shrek doll grins on her lap. “You don’t think of an 80 year-old having a sense of humor,” Brian says. “She loves to laugh. There’s still life in all of them that you don’t think of when you walk into an assisted-living home.”

Brian’s compositions are simple and straight-forward. The photographs emphasize the subjects’ faces, their expressions.  “I think there’s a real forgotten beauty to [the elderly] that is not heralded in society,” Brian explains. “Having someone move around, someone who is taking [the photographic process] seriously, makes them think, ‘I do have beauty.’ When you’re in a[n assisted-living] home like that…you walk into a room and you’re seeing an older, wrinkled person, but for a huge part of their life they were something more.”

Each portrait, like that of Whistler’s mother, is a tribute to lives brimming with adventure, joy, pain, laughter, and love. The smiling faces we see, etched with a breadth of memories most of us can barely fathom, represent the pillars of the church and of our community: the members that worshiped every Sunday, some for more than fifty years, volunteered for brunches and dinners, sang in the choir, baked cakes, ran errands, and stood at the doorway, greeting church-goers as they walked into the sanctuary. We are lucky enough to see some of these faces regularly still: those who still come to Sunday worship, or the Speaker Series, or play Bridge in the Center on the Hill each week. But the faces we don’t see as often are missed.

Brian’s portraits are such a gift, and are a unique and poignant way to honor our elders: to not only see their beauty, but to capture it, and share it with all of us.